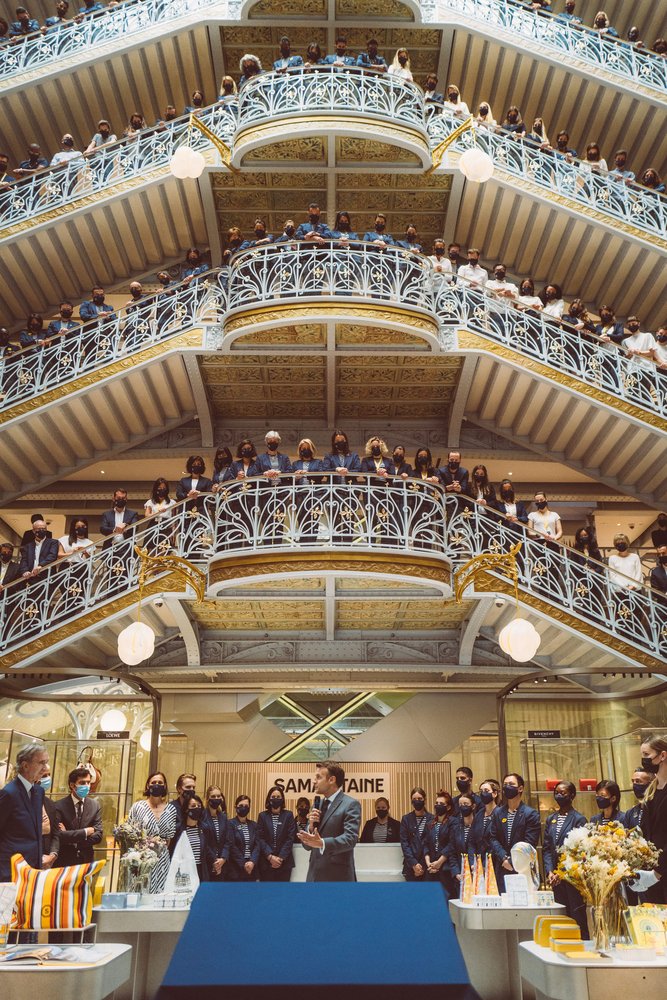 department store La Samaritaine revealed itself on Monday, after an estimated €750m investment by its owner LVMH.

The result, an exceptionally beautiful shopping and dining experience, in a lovingly restored Art Deco monument on the banks of the Seine overlooking Pont Neuf; with an impressive product mix that nonetheless seemed on initial inspection rather formulaic.

However, there is also a brand new glass block on the rue de Rivoli, designed by the famed Japanese design partnership of Sanaa, winner of the Pritzker Prize. Opinion will surely be divided on the latter, some seeing it as an expression of 21st-century modernism, others a banal undulating block of icy glass.

Underlining what a big deal it is to the luxury conglomerate,  early Monday morning, LVMH Chairman and CEO Bernard Arnault opened the seven-floor store in the presence of President Emmanuel Macron and Paris Mayor Anne Hidalgo.

Whatever else they say about him, Arnault turns out to be an equal opportunity retailer. There were so many boutiques from brands within the Kering Group, LVMH’s greatest rival, one wag had already christened the space 'La Saint-Keritaine.' We counted five different Gucci spaces, from menswear and women’s wear, to sneakers, bags and sunglasses. Plus, the most handsome bag store on the key ground-floor was Bottega Veneta. Even if the stellar names of LVMH – Dior, Louis Vuitton, Givenchy, Fendi and Kenzo – all had plenty of space too.

A third key element, the latest Cheval Blanc, the latest play in the burgeoning hotel chain of LVMH, will open on Sep. 7, built within an Art Deco structure with marvellous views of Paris.

Cheval Blanc, with 72 rooms all looking over the Seine with starting prices of €1,500 per night, decorated by architect Peter Marino, will assuredly be a must-visit destination too. Another vital lure, over a dozen restaurants – several helmed by Michelin star chefs and shared between store and hotel, stretching from the Seine to the rue du Rivoli. Including a Parisian outpost of the famed Milanese seafood restaurant Langosteria, in a top-floor space offering a magnificent vista of the Seine and the Eiffel Tower. The hotel also looks to be boasting the city’s most expensive suite, a 1,000 square-meter, seven-room penthouse with cinema and private pool, though the room rate was not revealed.

De Boysson claimed that there will be over 600 brands, 50 of them exclusive and with hundreds of exclusive products. Throughout, there was a broad range of prices, and multiple mid-range brands – Michael Kors, Coach, Sandro, Maje and Ugg to name a few, casting doubt on the claims of La Samaritaine to be a concept store.

Whole floors were devoted to shoes and to jewelry, where Tiffany was prominently displayed, in a boutique that featured more gold than one is used to discovering in this brand’s retail spaces.  All told, 1,700 staff will operate Samaritaine Paris Pont Neuf, whose title suggests that LVMH may well roll out other editions internationally.

“Shopping today is about having an experience, a voyage of discovery and enjoying the Art of Living à la Française,” said de Boysson, the CEO for Europe and the Middle East of DFS, yet another LVMH holding, which will operate the store.

The actual store is divided into a main space laid out like a tony department store; while a concept store space named Rivoli contains fairly predictable selections of streetwear, and obvious picks like Comme des Garçons or Reebok by Victoria Beckham.

There is even a curious low-price emporium, with 35-euro silk bracelets, named La Boutique de Loulou, named after the founder, with its own direct entrance onto the street.

Visitors can also discover Continental Europe’s largest beauty section with studio and spa in the basement, though quite why there was an Emporio Armani watch shop in the middle of this space was hard to fathom.

At a press conference, four LVMH executives were miserly about possible sales projections, though they did say they hoped annual traffic would reach 5 million visitors within a couple of years. Jean-Jacques Guiony, CEO of La Samaritaine, did admit that he hoped his concept-big boutique-department store would eventually match the annual turnover per square meter of Le Bon Marché, LVMH’s Left Bank department store.

Chastised by a veteran editor for the lack of financial transparency, one of three well-fed LVMH publicists responded: “We don’t want talk of figures - that would spoil the dream.”

No, the lack of creative retailing will probably do that.  Anyway, if things don’t work out they can always call us for the mail address of Sarah Andelman of Colette. Now, that’s what we remember as a real concept store.