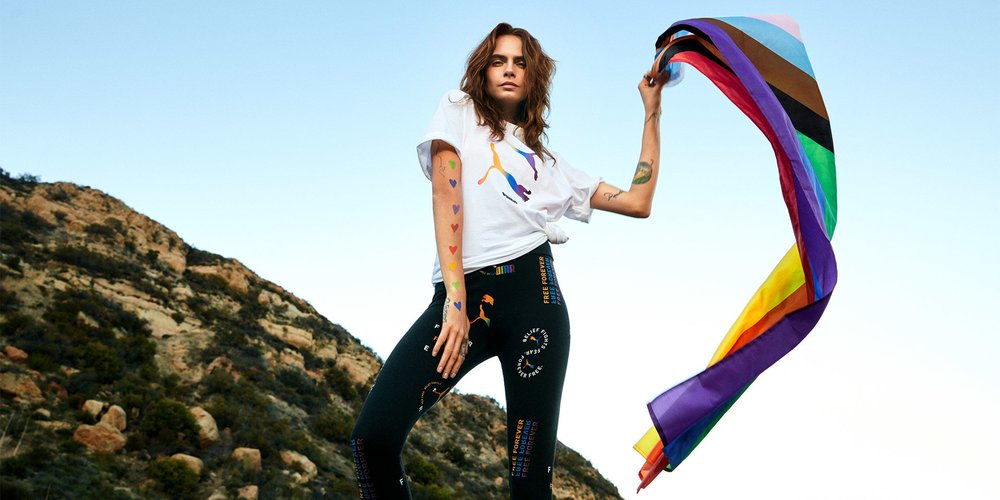 Fashion is celebrating Pride Month, decking out scores of collections with the colours of the rainbow. From

trousers to sportswear, handkerchiefs to wallets, t-shirts and backpacks to simple summer sandals, hundreds of garments and accessories are trumpeting the fashion industry’s support for the LGBTQ+ community.

Balenciaga, Dockers, Puma, Ralph Lauren and Victoria Beckham are some of the labels that, in the month of June, have launched capsule collections in solidarity with the LGBTQ+ community, allocating part of their profits to prominent associations supporting the LGBTQ+ cause.

The luxury label will donate 15% of the proceeds from the collection’s sales to The Trevor Project, a leading suicide prevention and crisis intervention organization helping lesbian, gay, bisexual, transgender and queer youth.

Victoria Beckham has dropped a new Pride collection, for the third consecutive year, an initiative which is also promoted by Beckham’s fellow Spice Girls.
“I'm very excited to share this year's Pride t-shirt with you! For the third year in a row, we’ve partnered with the wonderful @aktcharity, this year with a special Wannabe t-shirt," posted Victoria Beckham on her Instagram account.

“100% of the proceeds go to AKT [the Albert Kennedy Trust], to continue funding the amazing work they do to combat LGBTQ+ youth homelessness in the UK,” she added.

“Pride to me is a celebration of being completely yourself and this year's t-shirt is a reminder of that. The Spice Girls really championed accepting yourself and others, being kind, having fun and just living your best life!” Beckham also wrote on Instagram.

Puma has again featured supermodel Cara Delevingne in its new campaign for the Forever Free collection, while Hugo Boss has marked Pride Month by launching a collection in support of ILGA World, a global confederation of more than 1,700 organizations from 160 countries and territories fighting for equal rights for the LGBTQIA+ community.

The campaign features actor, writer, director, photographer and activist Tommy Dorfman alongside Peter Zurkuhlen, chief of staff at social support organisation Get Help and programming board member at the StartOut initiative in Los Angeles. In the campaign, they both share their stories and talk about pride, freedom and hope.

Spanish footwear brand Mibo, based in Menorca in the Balearic Islands, is celebrating diversity with the ‘Pride’ sandals in white napa leather, released in two versions decorated with the rainbow flag colours, in glitter fabric for one version and Nubuck leather for the other.

In a similar spirit of solidarity, Dockers has presented its fourth annual ‘United by Love’ collection, through which the footwear brand “is proud to support” the Stonewall Community Foundation, as Dockers said in a press release.

Dockers has donated €5,000 to the foundation, whose efforts are focused on bolstering the LGBTQ+ community in the United States through a variety of projects.

To illustrate what it means to be united by love, the collection’s campaign portrays staff from Dockers's design and production teams and their friends.

US label Ralph Lauren has regularly staged Pride Month initiatives, and this year is no exception, as the label dropped a Pride capsule collection. The proceeds from its sales will go to the Stonewall Community Foundation, whose work in the USA prioritizes those who experience the greatest vulnerability within society, including communities of colour and transgender, gender non-conforming and non-binary people.

In June, Ralph Lauren has also partnered with artists David Puck in New York and Ashton Attzes in London, both members of the LGBTQIA+ community, who have created artistic outdoor murals to celebrate Pride Month.

Dutch fashion retailer C&A has marked Pride Month by decking out its website with the colours of the rainbow, to join in the “celebration of diversity, equality and unity, using fashion to address such crucial issues as equality and the rights of the LGBT community,” C&A said in a press release, launching its LGBTQIA+U+ME campaign.

“We strongly believe in a future that fosters equality, one in which everyone has the freedom to express and be who they really want to be,” said Celina Bello Blanco, HR director at C&A Spain and Portugal, adding that C&A will collaborate with the Riccardo Simonetti Initiative.

H&M-owned label COS has dropped a re-purposed cotton tote bag printed with the colours of the Progress flag, as well as a limited-edition t-shirt capsule collection in three exclusive designs. The proceeds from the collection’s sales will be donated to the Kaleidoscope Trust.