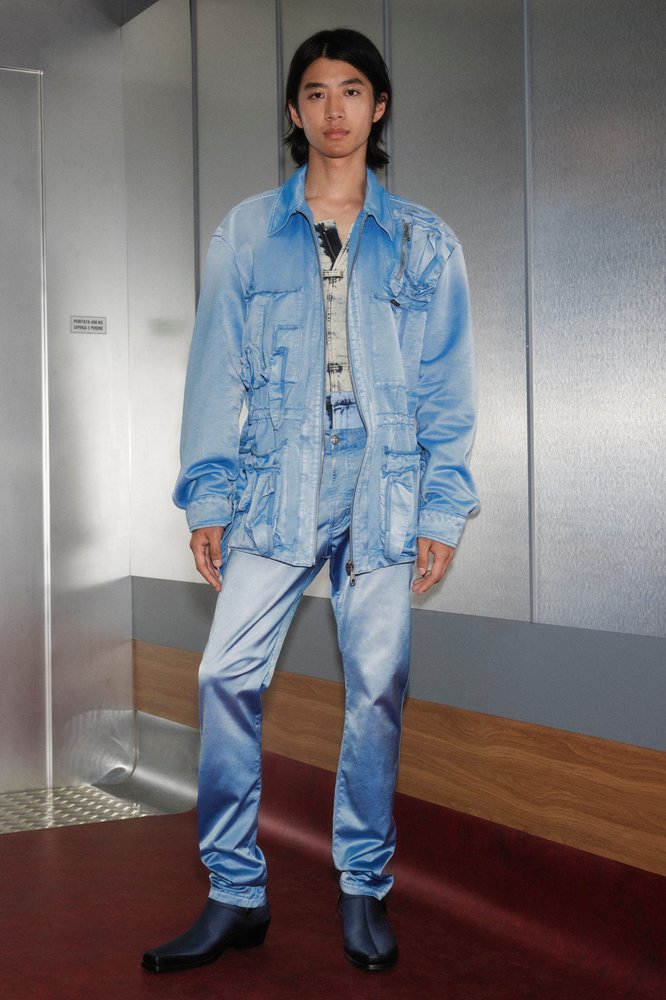 Fashion likes nothing more than a debut, and the biggest one in Italy this season was designer

Martens, 38, unveiled his first full collection for the house in a show video on Monday, presented on the official calendar of Milan men's fashion week runway season.

Instead of a show, Martens organized a dream-like eight-minute film to express his vision of Diesel – one with an overriding choice of raw material – denim.

Blessed with youthful beauty, his cast begins by dancing around a private loft party to acid techno chords courtesy of Leon Vynehall. All of them look very cool; in dozens of denim ideas – decayed, distressed, damaged and delightful, in a punchy opening statement.

“Few brands have as much global impact as Diesel. And its key material is denim, the most important fabric in the world. When you put the two together you have the power to sell to anyone no matter the region, country, sexual identity or paycheck. Diesel is very democratic. That’s why I accepted this job. It is not just making some pretty dresses. Diesel is a way more a social project than just fashion,” insisted a clearly energized Martens in a pre-show Zoom.

Further into his video, his raven-haired heroine leads her troupe along a street scene – couples meeting and embracing before reaching an elevator into which the preternaturally self-assured youths marched in some marvelous parachute fabric constructions  and concoctions.

Martens continually creates in eco-responsible denim, including an upcycled capsule – made in organza from Diesel’s own stock – then cracked and embalmed. Or playing with denim bonded with organza in dramatic coats; or even bonding cardboard packing material to denim in another risky play that nonetheless worked.

“Diesel never did conceptual garments before, so I had expected to cancel out lots of looks. But in the end, so many of the garments referenced rock, so I decided to include them all,” he cackles.

Martens sees Diesel, a billion-euro brand, as very much part of pop culture from MTV, and he respects the labels roots in backstage attire and after-party excess.

However, what’s great about the collection is the way he takes Diesel somewhere new – like using trompe l’oeil in archive looks - in easily the best collection for the house in many years. He also harnessed his new concept eco-responsible Diesel Library to whip up some craftily  constructed askew clubbing gear; sexy jeans; or natty billowing gaucho denim jeans with matching boots.

“In 2021, we have to be aware the world is fucked up and we have to change. Library is a core money maker of the brand – and now all cotton treatments are certified. Our supply chain is fully controlled to make a very clean product,” insists Martens, who has worked at Diesel’s headquarters in the Veneto region. Though he now plans to move the design studio to Milan this month.

Martens even printed QR codes inside certain garments, “so you can see when you go to the toilet that we are truly committed to the environment! You know, my parent was a single mother, who worked as a cleaning lady at weekend to raise my brother and I.  And she did not give a shit about the environment. She didn’t have time to worry about sustainability. And that’s true of many people. So there is a message in our garments to help raise awareness,” explains Martens.

In a sense this collection also marked the decision of Renzo Rosso, Diesel’s founder and billionaire owner, to loosen the creative reins. Giving Martens carte blanche in the key brand of his growing fashion empire, whose holding company Only The Brave controls Marni, Maison Margiela and Viktor & Rolf.

“I want people to think they can find fun at Diesel. That’s the Only The Brave identity. Irony is intrinsic to this brand. Diesel was very well run for a long time, but it’s a big company and maybe was on automatic pilot. Being from outside I have a chance to bring a fresh eye,” he concludes.