It’s not even officially awards season yet in the Northern Hemisphere, but there’s still been plenty of high-profile – and very stylish – red carpet ‘dos.

We’ve had the Venice

International Film Festival, the Met Gala, the MTV VMAs… The Tonys are around the corner, too. But the most recent big event has been the 73rd Primetime Emmy Awards, which saw a bevy of well-dressed celebs take to the red carpet to celebrate the best in American prime time television.

When it came to the most stylish men, it was definitely a game of the usual suspects: Regé-Jean Page, Seth Rogen, Eugene and Dan Levy, you get the picture. But the standout outfit of the event was easily Jason Sudeikis, the talented actor/comedian cleaning up in more ways than one.

The 46-year-old funnyman chose a blue velvet tuxedo for the awards show, which he paired with a large, floppy bow-tie and patent leather Chelsea boots – an eclectic look which we’re proud to present him with the DMARGE Best Dressed Man of the Emmys Award for, an award that totally exists. 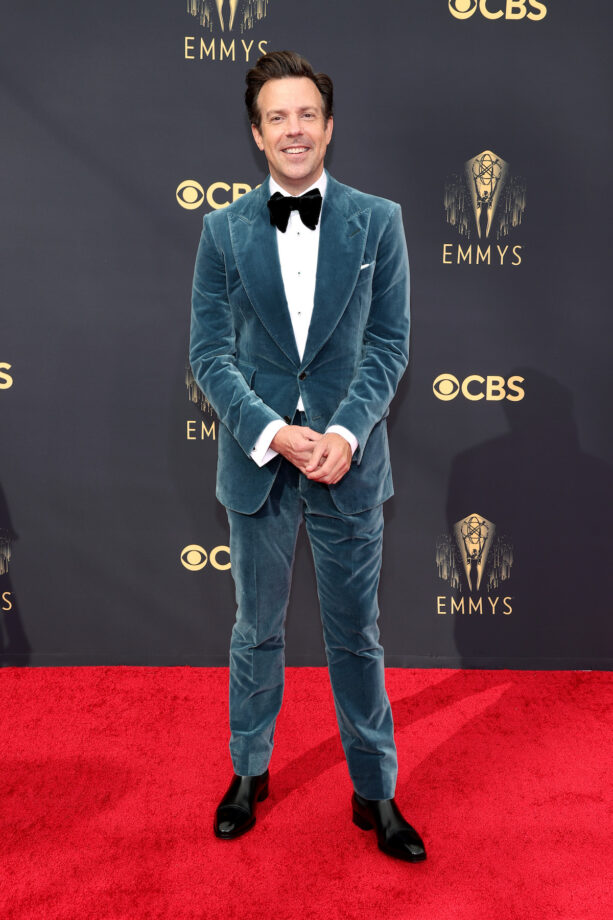 It’s a super kitschy outfit – reminds us of that scene in the fourth Harry Potter movie where Harry and Ron have those terrible suits for the ball – but he actually makes it work. Really, it’s a power move wearing something so retro.

Sudeikis didn’t just come up trumps in the fashion stakes, either: he also picked up his very first Emmy for Outstanding Lead Actor in a Comedy Series, for his performance as the title role in the Apple TV show Ted Lasso.

The series follows Ted Lasso, a folksy American college football coach who is hired to coach a fictional English Premier League team, a character Sudeikis originally portrayed in a series of popular promos for NBC Sports.

Sudeikis’ tux might be eye-catching but it’s by no means the most eye-catching outfit we’ve seen in recent weeks. Check out our report on the breakout celebrity style trend: men wearing skirts.