It’s been a scintillating September when it comes to awards shows and big celebrity events, like the Met Gala and New York Fashion Week, but one celebrity power couple has

been conspicuously absent: Beyoncé and Jay-Z.

That’s because the talented musicians have skipped the red carpet ‘dos for an extended holiday in Europe with their family and friends. The pair have been living lavishly, jetting around the Mediterranean on Amazon founder Jeff Bezos’ US$500 million mega-yacht and dining at some of Europe’s top restaurants. Must be nice. If that wasn’t exxy enough, Jay-Z has apparently treated himself with a fine European timepiece for a souvenir.

Over the weekend, Beyoncé shared a photo of herself and her husband relaxing on the yacht, draped in designer clothes – Mrs Carter in Dior and Mr Carter in an AMIRI x Playboy shirt – with Jay looking particularly staunch with a champagne flute in hand and a new Audemars PiguetRoyal Oak Perpetual Calendar Openworked worth a cool AU$585,650+ on his wrist.

It’s yet another worthy addition to one of the most lavish watch collections in the rap game. 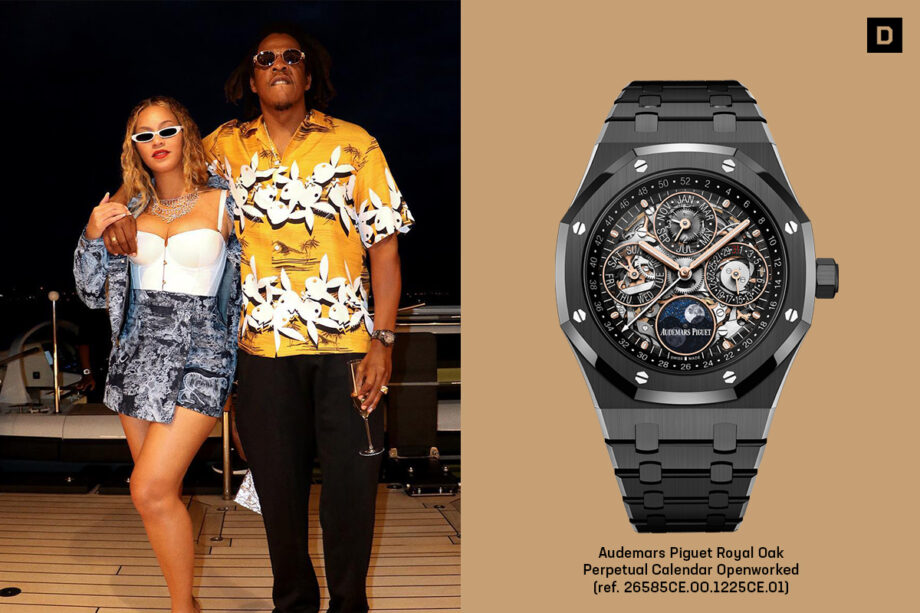 First released in 2019, this version of the famous luxury sports watch boasts a veritable cavalcade of impressive features. As the name implies, it features a perpetual calendar, which also incorporates a moonphase complication at 6 o’clock. Subdials at 12, 3 and 9 o’clock depict the month, day and date respectively. Instead of a seconds hand, the watch’s third hand displays what week of the year it is, with week counters placed on the watch’s chapter ring – a rather unusual touch.

But the horological flexing doesn’t stop there. Key components of the movement are constructed from pink gold, which is exposed by an openworked sapphire dial (not to be confused with a skeletonised movement). On top of that, the watch’s case and bezel are constructed from black ceramic.

It’s like a ‘greatest hits’ of haute horlogerie all in one watch – the perfect piece for a musician hitmaker like Jay-Z.